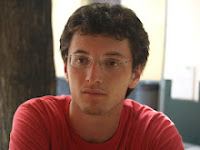 In this first collaboration with cienciaeconomica.com, I would like to begin talking about two concepts that are very present in today’s world, and further accentuated by the deep crisis in which we are in.
I will start by referring to the concept of income distribution. Income distribution is how a nation’s total GDP is distributed across its population. The factors that may affect income distribution include: taxes, monetary and fiscal policies, labour market structure, education and others less economically related such as gender, race and education. Regularly we hear in the news people claiming that with the current crisis rich people are getting richer and poor people are getting poorer. This is indeed a real problem, in terms of income distribution, means that the percentage of income received by the top households in a country increases, while the percentage of income received by the poorer class households decreases.
Typically the top 10% of the households for rich countries hold around 20%-25% of the GDP of the country while in less developed countries this figures grow substantially, up to 45% or more. While the bottom 10% holds around 4% for rich countries and as low as 1% for underdeveloped countries. 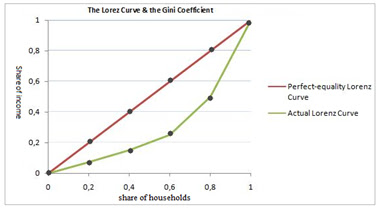 There is a way to represent income distribution graphically by using the Lorenz Curve. To give an example, lets suppose that we divide the society into 5 segments going from poorest to richest. A perfect-equality Lorenz Curve would divide the 5 segments equally giving 20% of the income to each group, however, the green line shows us what actually happens, and clearly states that the top share of households have a grater share of income than the bottom share. The ratio of the area between both lines gives as a result, the Gini Coefficient. It is the most common way of measuring inequality as it is used by many international organisations, such as the world bank and the united nations, it is defined from 0 to 100, 0 being perfect equality and 100 perfect inequality. As an example, here is some data from a research done in 2011 by the OECD (http://www.oecd.org/dataoecd/40/12/49170449.pdf)

The Gini Coefficient is also used to measure differences in other areas of the society such as the income inequalities between male and females, age groups, and groups with different levels of education.
This coefficient turns out to be very handy, not only for economist but also for politicians, since they can relate to this indicator to implement different policies across regions and different groups of the society, as you can imagine it is widely used as a macroeconomic indicator to try and achieve a more equalitarian society.